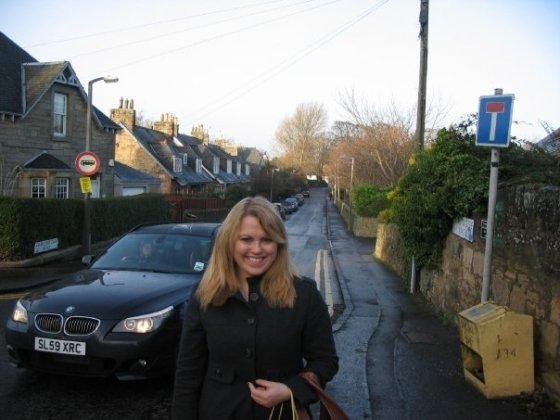 In 2003, internet cafes were a thing. So were calling cards and phone booths – sorry, phone boxes.

As a nineteen year-old American living in Edinburgh, reaching home to Colorado involved purchasing  a phone card from the newsagents and finding an open telephone box. You know, the red ones everyone gets excited about.

Only once you were in one and the door closed, you’d wish to be anywhere else. They smelled of urine, and that’s if you were lucky. After dialing about 100 different numerals by way of categories, pin numbers, etc, you’d sigh with relief (but inhale reluctantly)as you waited over a static-filled line for the endless ringing and ultimate, ‘Hello’ (from the other side).

This is how I told my parents I was engaged to Alex. I  stood in a disgusting phone box in the Grassmarket hoping my credit didn’t run out as I plunged into the rather  shocking news I was getting married to my Scottish boyfriend of five months, the one they’d never met. And then it was, “Oh, no, it  just told me I had one minute!” And then a beep, and then “Hello? Hello? Oh, I ran out of credit.”

And in a week, repeat.

Internet cafes were better for speaking to my friends in Colorado. Brevity was the key, however, as time ticked away. Here is an actual email I sent (all names omitted):

Internet cafes, calling cards, soup in a cup, drink specials and being out until 4 am just about summed up the first part of my life in Scotland.

Something else was a thing for me back in 2003, as well: establishing who I was outside of my parents’ home. My best friend and I were on our own for the first time.  Baptism by fire, you could say. Out of the frying pan and into the fire.

Just, fire in general. It was hot, alluring and potentially dangerous.

But I LOVED it.

So much so, that when I settled in Edinburgh in 2004 on a fiance and then marriage visa,  Scotland slowly grew into the land where I learned how to be an adult. How to pay bills, rent flats, look for jobs, navigate relationships, and make my own decisions for the first time ever.

It is home to me because I lived there, but also because of who I became there.

The castles, the scenery and the history were amazing, but secondary to things such as going with my best friend to Pound Stretchers to buy linens for the first time in my life.  Or having Alex carry me over the threshold of our hundred year-old tenement apartment.

Maybe it sounds strange; I don’t care at all.

You can’t choose where your heart calls you (though you can supress it). And my heart led me to Scotland, which led me to Alex, which led our son, Alistair.
With Alistair’s dual citizenship, I feel even more tied to the place which I love.
When Alistair turned two, surrounded by his Scottish grandmother, uncle, aunt, cousins and friends, I made a wish it wouldn’t be his only birthday spent in Scotland. I can look back  on videos and see where Alistair first learned to talk in Edinburgh…with a Scottish accent. His first friends were  in Scotland -Winston and Alex – his little soft-play mates, fellow pebble tossers, play-group goers, and hand-holding buggy buddies as we walked up the street. He won’t remember those tender moments, but I’ll never forget them.
From simple streets, less than glamorous flats, days in and out of menial jobs to stressful universities and suburbia…and countless bedtime routines with Iggle Piggle and ‘cleaning your teeth,’ the years have passed and adulthood has blossomed.

I think the place you find love will also always be home, and if you love the place as well….then you are doubly lucky.

Your predecessor haunted me. It followed me for months:

I walked through Scotland’s haze with a ringing in my ears and a coffin in my back pocket.

The drama pronounced itself in both circumstance and surroundings: I lived out my  grown-up dream of a creative writing degree in the city just a decade before I’d lived out my growing-up dream.

I pushed my toddler in a pram down the same roads I’d drunkenly stumbled through in the past. I came home in the evening to diapers and literary theory and a husband who’d just a decade before been sweeping me off my feet but now collected the dust of our stagnant relationship.

Panic overtook me in the most privileged guise imaginable; a married white woman,  mother to a healthy child, living in a European capital to pursue an arts degree, was having a case of existential malaise over the loss of a number, of a decade, of time.

Yes. I loved the freedom of my 20’s, the laughter, the chaos, and the possibility. But yes, the burden of unfulfilled potential still haunts me. The weight of choice still keeps me up at night. I often wonder how anyone sleeps, knowing the impact of each minute gesture. The power of our choices.

But 31, you’ve taught me those aspects of my personality aren’t a crisis, but the state of my soul, regardless of age.

The state of my soul has never been been more grounded in reality. In clarity. In understanding.

My 20’s were fun, but I lived in world of black and white. Eithers and ors. Nothings or everythings. Certainties.

Turning 30 wobbled me, spun me around on my axis, and landed me in a position where everything is a shade of grey.

And I’m fine with that, now.

Life is colorful, but it’s never black or white.

The water of life is murky, and seldom clear, but refreshing nonetheless.